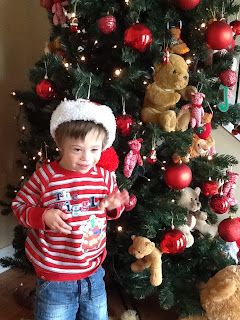 We had a thanksgiving meal last Friday (once we'd persuaded Lily it was more important than watching Shortland Street and making her leave her flat)and then started the Christmas decorating. It coincided with Hannah moving out into a flat so was very hectic. Bot now we have a relatively tidy and quiet house decorated for Christmas. Isaac is by our teddy bear Christmas tree that stands in the hall and Noah got to turn on the outside lights for the first time last night as it was December 1st (it doesn't get dark enough until nine o'clock in this NZ summer).
All eight kids will be here (along with four partners) for our Christmas meal this year, we will eat early evening, so Sam and Anika and Hannah and Thomas can spend lunch with their other families and Beth and James other family aren't having their celebration till Boxing Day when James' brother returns from Japan.
Noah finishes school on Thursday and has already had the graduation ceremony for his special needs unit. Isaac and I attended but Noah didn't - or at least he was the other side of a locked door into the gym, hidden away in the foyer. When I arrived his teacher said he had run off and as this is a fairly regular occurrence we decided to wait for him to turn up again. After an hour, the ceremony was in full swing but I was really worried, came home to see if he was there and was then ready to call the police. Finally a teacher aide and the school secretary found him sitting quietly in the unused foyer a bit sad that he had heard them singing but hadn't been able to take part in the song he'd practised but otherwise Ok. It still adds wrinkles to my face with each disappearing act though!
Posted by Angela at 7:46 AM No comments:

The boys have just gone back to school but we now have a long w/e. We drove to
Gisborne accompanying Paul to his clinic there and on Isaac's seventh birthday it was so warm we spent some time on the beach. At first Isaac just sat cross legged on the sand but eventually enjoyed splashing in the water while Noah spent over an hour burying sticks. We even got Paul on the beach after his clinic! 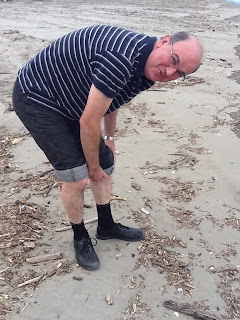 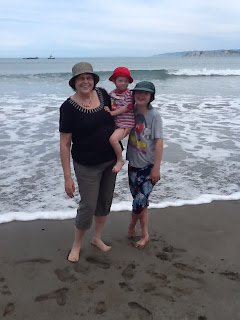 My study is not going well this week as Hannah, Noah and Isaac are all sick. I have finally got Noah back to school today after three days off - we could tell he was recovering when we found him trying to open the bonnet of the car with some wires in the other hand! Isaac however is at the stage where he doesn't want me out of his sight but everything I do is wrong. He just asked for an ice-cream then immediately threw it on the floor, an improvement on yesterday I suppose, when I had to fight hard to get a grand total of just 250ml fluid in.
Paul is missing the fun by having three days away so this meant Isaac slept with me last night. "Slept" not altogether accurate, but I did get 4 hours of sleep in a row from 9.30 to 1.30.
Hannah is a bit sorry to be missing time from her social work placement in child protection but she only emerges from bed for a little while then goes back to sleep again. She has to get a doctor's certificate this afternoon, so hopefully they can decide whether or not she has a bacterial sinusitis following her viral infection.
Counting down the hours for Paul to be back (tonight) so I can sleep in Lily's empty bed downstairs, maybe take a walk by myself and have a little bit of quiet time to do some study. Then I'm assuming that over the w/e Paul and I'll get sick with the bug!

We had a great trip, just Paul an dI and Noah. Three nights in Singapore, overlooking the beach of Sentosa Island, going to the small 'Universal Studios" they have there. I was brave enough to go on the transformers ride and probably enjoyed it more than Noah, although he went on the very scary cyclon roller coaster which I didn't dare do. We had a lovely time in UK in spite of the weather (I kept saying it was no better than NZs winter only to return here and find that in fact it was much colder here!). We were so impressed with Liverpool (where Paul had a conference) it was just beautiful and Noah and I went on a "ferry cross the mersey" and raced round a wallace and Grommit in space exhibition - it said allow two hours but we'd finished in 40 minutes - the best bit being that we had the whole Wallace and Grommit gallery to ourselves as we were by far the first to reach it! Noah managed to set off a fire alarm at the Beatles exhibition by escaping through a fire exit and being with him all the time we saw just how impulsive and difficult his behaviors can be. It meant that once we were back we were happy to start him on the clonidine his new paediatrician suggested. This seems to be making a big difference - occasionally now if I ask Noah to do somethign he says "sure" rather than an immediate "no".
It was good seeing the parents again, and my sister and family as their holiday from NZ to Europe happened to coincide with ours.
It was a long flight back, especially as the radar broke down in Munich just as we were in a full plane about to begin a 12hour flight. We sat for over 3 hours on the plane before taking off, but luckily had a long stop over in Singapore with a good sleep in the transit hotel. It was lovely that Joe and Rachel met us at Auckland airport as we had over 3 hours there.
So now we're back to some kind of routine, The boys are in school and I am studying to take a medical multiple choice exam in Feb - the first step to registering as a doctor again.
Lily is lovign flatting. She rarely even wants to vist us now and had a very successful flat warming party last w/e.
Posted by Angela at 12:57 PM No comments:

I have just finished one of my massey exams, next one on Tues then I've finished my course!

Two days afterwards it's off to UK for Paul, Noah and I, having the holiday we missed over Xmas celebrating birthdays for Noah and me and attending a conference in Liverpool for Paul. Hannah is looking after Isaac her in NZ she volunteered after I foolishly said "It would be easier just to pay Isaac's fare to someone in NZ for caring for him rather than take him"
Lily seems to be enjoying flatting. They have a strict routine with menus and chores on a white board and she has someone to remind her to have showers etc. I worry about her getting cold but luckily the flat is well insulated and she sometimes remembers to wear a jumper!
Noah's school behaviour is a bit 'off' again. I got a phone call from his teacher who I think was trying to threaten him with "I'll phone your mum" and then had to follow through. Hopefully it's just because we're near the end of term and it will improve with some concentrated attention from Paul and I while on holiday.
Posted by Angela at 1:37 PM No comments:

This Saturday Lily will start flatting with two friends who also have Down syndrome. She has no concerns at all in spite of being unable to remember the address of the house! (we are working hard on that) Paul and I have many concerns, but luckily the organisation that will support them is very helpful and keen to hear our ideas.
They will have helpers in from 7.00 to 8.30 am and 4.30 to 7.00 pm on Monday to Friday and a bit less at the w/e.
I said Lily could choose her own bedding for the first time (at the moment she has to have stuff I consider matches our colonial style house) so with her beautiful antique style sleigh bed she will have a black duvet cover and pillow case with pirates and skulls on it!!

Also this w/e Hannah and I are going to Sydney to visit Beth , James, Sam and Anika, leaving Paul with the boys. This was arranged before we knew the flatting dates and Paul is not best pleased!

Everyone is doing well. Noah has an IEP and I knew they truly understood him when for his goal of reading and understanding his time table they said "partially achieved" he can read the time table, but does not always choose to obey it!!
Posted by Angela at 2:09 PM 3 comments:

We are now reaching the end of a relaxing two weeks of holiday. The two boys and I accompanied Paul to his two day clinic in New Plymouth and even though I was initialled concerned about how we would fill the time between needing to leave the motel at 10am and Paul's clinic finishing at 3pm we coped well, spending well over half an hour at the tourist information place where Noah played on the interactive map and Isaac watched the 12 screen TV. We also went to see the Lorax at the movies and Isaac behaved relatively well and was luckily surrounded by many young children not behaving much better. I said I would practice driving on the way back and drove from Egmont village to Inglewood (possibly 2% of the journey) not exactly sharing the driving! In Inglewood a lady opened the toy museum for us that was supposed to have closed (this is why I like NZ) very interestign to see how they made lead model cars in atiny cottage industry based on the toys the owners kids liked.
Back to school tomorrow and I am hoping I cleared out Isaac's lunch box at the end of last term and will not find it going mouldy in his school bag tomorrow morning!
Posted by Angela at 12:42 PM No comments: