the measles that wasn't 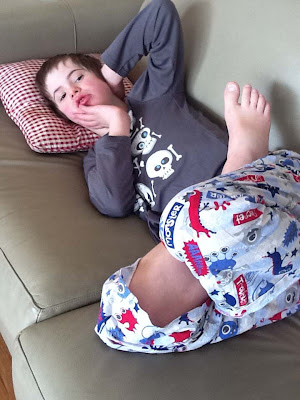 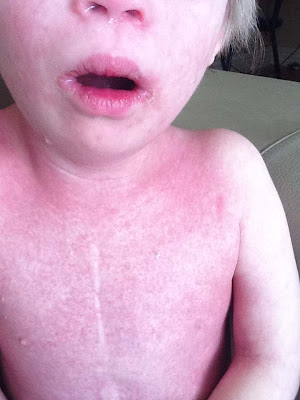 Last week all three boys were sick (Paul, Isaac and Noah). On Sunday Isaac had been off his food but there's nothing really remarkable about that so I'd not taken any notice, but when I changed his nappy I noticed he was really hot and had a terrible nappy rash which I then realised extended all the way up his trunk.
He got worse through Monday, ate nothing and hardly drank and we started looking up measles on various websites as that was what his rash resembled. On Tuesday Noah woke up with severe earache and a temperature and wouldn't eat and Isaac was so hot and lethargic that I skipped going to uni and phoned the GP. However by then Paul had chatted to the lab staff at the hospital who said there was measles going around so we canceled the GP appt not wanting to infect anyone there and decided Isaac had measles - a bit odd as he'd been fully vaccinated.

Paul did his clinic on Tuesday afternoon feeling rather unwell and then came home to bed.

Isaac improved for the better in the middle of the night climbing into our bed at 2am and constantly signing banana until i brought him downstairs and he ate his first food for 3 1/2 days.

Next day Noah came out in the same rash but was not so unwell as Isaac had been - we thought this was odd as he too had been vaccinated but as they have DS they are always a bit immunosuppressed so maybe the vaccine hadn't taken properly.

By Friday everyone seemed a bit better so I dared to go to my lecture at uni leaving Paul in bed and the boys in front of the TV.

I got a text from Paul saying he thought he had Koplick spots in his mouth - these occur before the rash of measles - so as he was in contact with so many immunosuppressed leukaemia patients while he was feeling unwell at his clinic, he thought he shoudl see the GP to see if it really was measles so the hospital would know if his patients needed immunoglobulin.

Although he wasn't convinced it was measles, Isaac fulfilled the reporting criteria so the GP phoned public health who said the boys had to wear masks and get blood serology test done, then Paul had to put himself in isolation until the results came back. The infectious disease unit at the hospital had to be informed

Wearing masks was a good way to get quick attention at the laboratory, all very exciting

Paul got Monday off work feeling very guilty as by then he had recovered without any rash.

Results came back negative, so not measles just a nasty measles like virus and now we're getting back to normal but with two much thinner than usual boys.