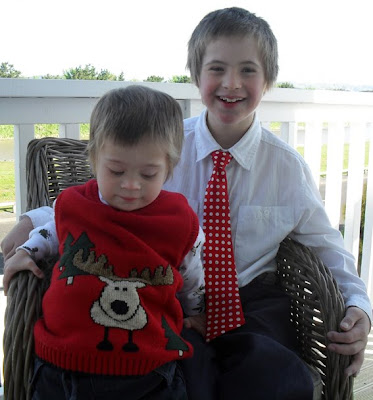 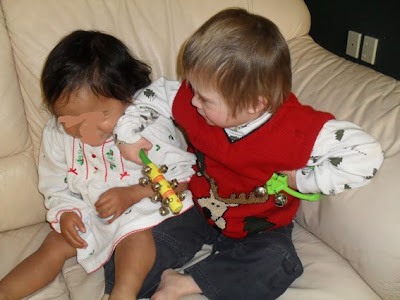 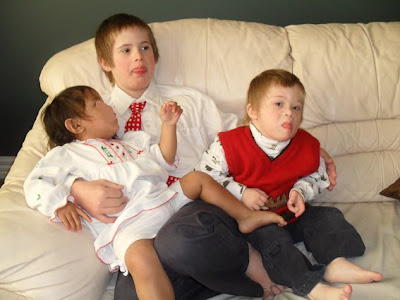 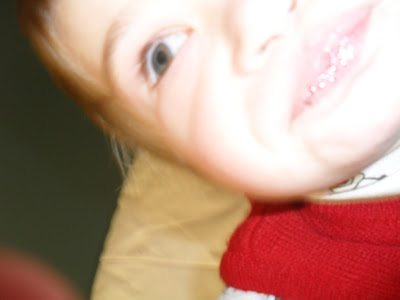 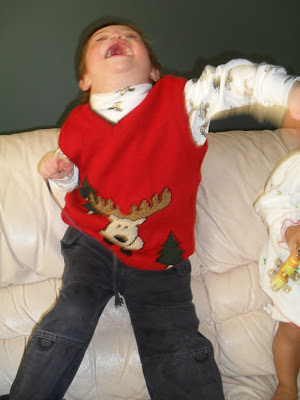 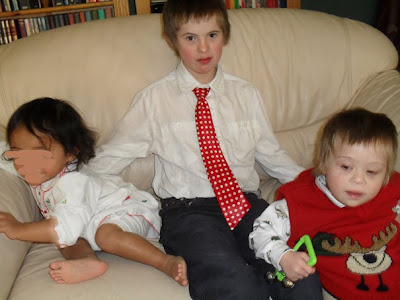 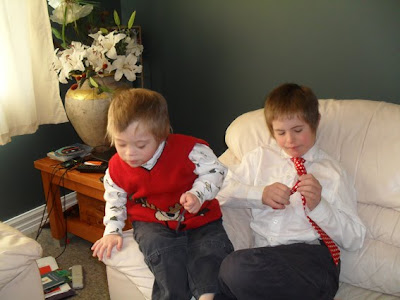 We have heard that Heidi will soon be leaving - possibly in just a few days (we have heard this before without it happening though) so we decided to take a few photos before she goes and thought as she looks so cute we'll include her in this year's Christmas card.
I bought some cute little Christmas outfits from trade me - Isaac's has a reindeer on and Heidi's has a holly decoration, so they wore those and Noah wore a red tie and we took 81 photos none of which were fantastic. Some were worse than others though! Thought you might like these out takes!
Posted by Angela at 1:19 PM 2 comments:

Another day of clinic visits yesterday for Isaac. It started with a hearing assessment for Isaac at 8.30am I realised this meant I wouldn't be able to get Noah to school and also that having Heidi present during the hearing assessment might no be a good idea - luckily Paul was here and able to get to work a little later bringing Heidi in with him.
The best bit was that I could say to Paul "I have to leave now, I have a meeting" which he often says to me leaving me with lots of children to organise.
I got to the hospital and Isaac had his assessment while Paul dealt with the children at home suddenly realising he didn't quite know how the morning routine went, the only minor issues were -
Lily nearly missing her bus as Paul didn't realise she had a watch that had stopped until she said "Is it 11.17 dad? When will it be 8.05?" at which point he realised it was 8.10 so she'd have to run

Heidi not having her hair done, (very fine black Maori hair that tangles everywhere) because Paul didn't realise I do her hair each morning

Anyway Isaac failed his hearing assessment as usual, his grommet has fallen out on one side and seems to be blocked on the other (although his ear does discharge on this side so it can't be totally blocked) and they suggested he gets hearing aides. One advantage of having more than one child with a disability is that we've been through this before with Lily, another is that as Isaac is under 18 unlike Lily he will get faster service and his hearing aides will be FREE!!

At 9.30 we had a meeting about the feeding clinic 'Kai time" it had said children weren't expected to attend but as Isaac was already at the hospital and as Heidi hasn't yet moved on as expected, I had to attend with two disruptive children. Heidi showed me she is now a typical 18month old (or maybe even a hyperactive 18 month old) when within the first ten minutes she had managed to climb into the therapists chair, find the breakable coffee cups, draw with pen on the walls, distribute all my handouts all over the floor and have a fight with Isaac.

We were asked to write down our goals for feeding clinic and then the therapist said we usually find most people have written "I want my child to eat fruit and veg."
This was the first inkling I had that our problems might be more extreme - my goals were "I'd like him to be able to take multiple swallows so he can learn to drink" and "I'd like him to be able to maintain or even gain weight" -Weighing 12kg at age 5 is way off the charts for typical children although it's still just on the 5th centile for children with DS

Then we were told "It's OK for your child to eat breakfast cereal in the evening" Well thank goodness for that as its the mainstay of Isaac's diet. The four mothers had to introduce ourselves and suddenly the difference in feeding issues became very obvious, the other children were 'picky eaters' not underweight, not unable to eat, never tube fed, not disabled, no history of muliple surgeries etc etc.

We were then told that Eating is essentially a learned motor behaviour and that 4-6% of the paediatric population with feeding problems will starve themselves.

This set off alarm bells as it is very based on the behavioural philosophy of feeding therapies rather than the self- motivation/regulation philosophy of Graz that I am trying so hard to believe in.

I am realising more and more that I am at the psychotherapy type side of the spectrum rather than the behavioural psychology side in much of my child rearing so I hope I am going to be able to cope with this clinic.

I guess really as a mum I will use whichever philosophy has the best result but I no longer believe that eating can just be learnt as a motor behaviour - the child needs to experience hunger so that some self-motivation come sin.

the real trouble is that if you want to get your child to eat by letting them get hungry you need a lot of support - if your therapists don't hold this view they're not able to offer such support.
Posted by Angela at 12:14 PM 1 comment:

It's hard to believe our little boy is five!!
We know exactly what things he likes so bought him three books about animals. He had a lot of help opening them from Noah and Lily then Heidi wanted to play with the wrapping paper while Isaac read the book. 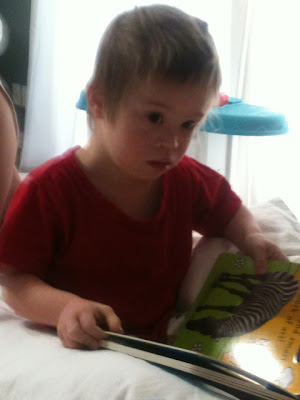 We also got a toy kitchen without being sure he would like it (I have a lot of toys in my house that are very popular with visiting children but never played with by my own children!) but actually it has four doors (rather like the aga in fact!) and Isaac loves opening and closing doors so it has been a hit. Heidi is also very pleased as it has a toy phone with it - it is so funny to hear this 18 month old little girl putting on a phone voice! (she has no words but great expression!) 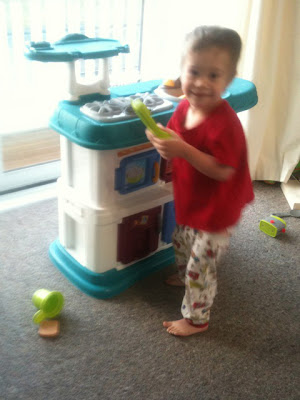 Noah bought Isaac the Dr Seuss 'Happy Birthday' book from the Dr Seuss exhibition in Woodville but this is really for Noah. It was a lovely exhibition and the curator of the art gallery was impressed when he heard Noah naming lots of the pictures so came to talk to us. Noah is now convinced that he's met Dr Seuss! 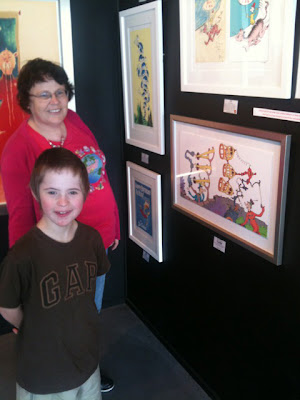 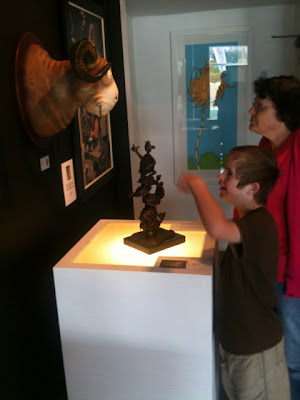 We spent the day getting Heidi ready for an access visit for which mum didn't turn up - like the previous four, then this afternoon Isaac celebrated his birthday with a hospital appointment with the dietitian. Tonight Lily and her helper will make tea (I think it's pasta) and we have cake with five candles on for dessert.
Posted by Angela at 3:44 PM 2 comments: