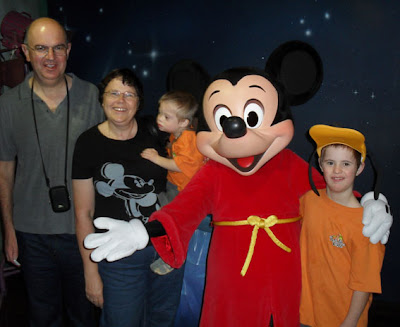 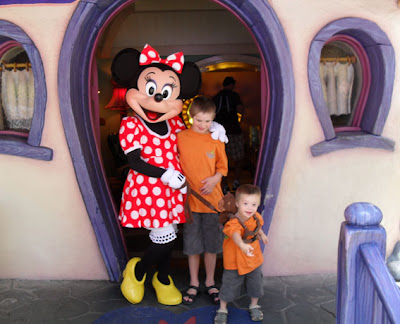 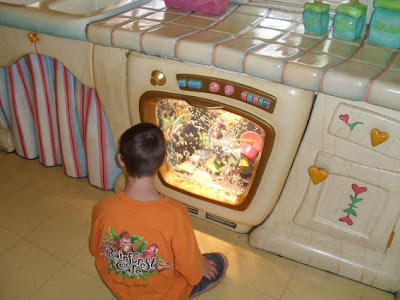 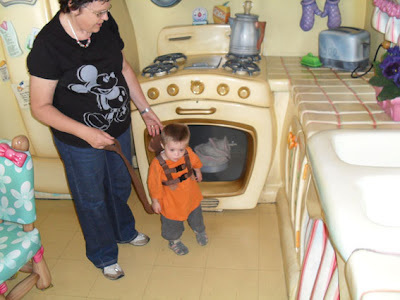 Some photos of the boys in Disneyland to cheer us up a bit as we're now into the middle of grey, wet dismal winter weather.
This visit we spent some time in 'Toon Town' and the boys loved going round Mickey and Minnie's houses. Noah was really taken with the dishwasher in Minnie's kitchen and wanted to just sit on the floor watching it for ages!
This weekend has been real rainy weather. On Saturday we got up early (helped by the fact I'm still jet lagged and waking at 5am) to take Hannah to the airport so she could go to Sydney to visit Beth
This was the first time for Hannah to travel alone so she was a bit apprehensive.
When we got to the airport there were two fire trucks outside and everyone had been evacuated and was waiting outside the terminal - the boys thought it all very exciting especially as it wasn't yet light and the flashing lights lit everything up.
Obviously it was nothing serious as we soon got inside and the check in for Hannah's flight was rushed through. They did say they'd be a few minutes late which might affect international transfers so we were a little concerned as Hannah's itinerary only had one hour and five minutes to change terminals and clear security and passport control. We watched her flight leave just before 7am and went to McDonalds for breakfast as a treat for the boys - we also found it was a great time to do our supermarket shopping. We then got to the Warehouse just as it opened (another fantastic time to shop) and treated ourselves to the DVD of 'The Wire' as they had 25% off all TV series and I had read while in the UK that this is the best series ever made (We watched episode one last night and could hardly listen for the bad language or understand the plot but we'll have to persevere as we've bought 2 series!!)
Soon after we got home we got a text from Hannah to say there had been fog at Auckland so they'd landed at Hamilton. There were no seats left on the next Sydney flight from Auckland so air new Zealand rerouted the four people in her situation through Rotorua which had a Sydney flight leaving at 5pm. She went in a mini-bus via Tauranga airport then had five and a half hours waiting in Rotorua for the international bit to even open - Rotorua is an airport as small as Palmy with only occasional international flights. So Hannah's first experience of travelling alone led her to experience 3 NZ airports that I've never been to! Still she's safe in Sydney with Beth and James now and has given James all the England World cup paraphernalia we brought back with us (Unfortunately not bringing any luck to the England team though!)
Yesterday Paul has a conference in Christchurch for the day, so I was at home with just the trisomy tribe. We decided to stay in all day and have a pancake brunch rather then a full Sunday dinner. I watched the last of the series of 'Brothers and Sisters' that we took to the UK with us and then found some more episodes online. Noah and Lily played on the Wii together and it was a good stay at home winter day.
Posted by Angela at 11:09 AM No comments: 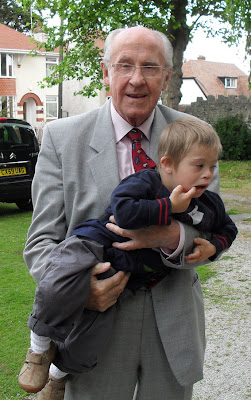 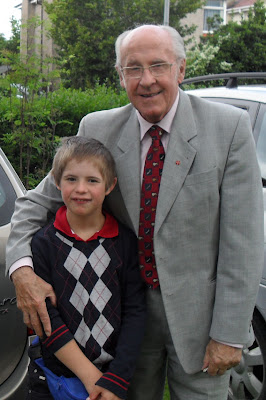 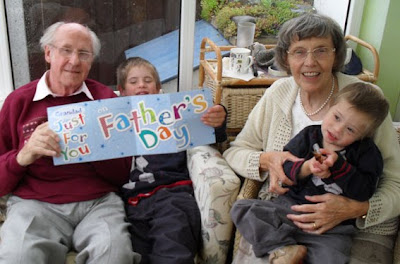 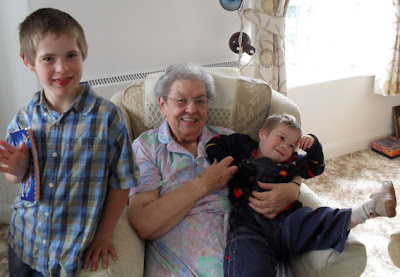 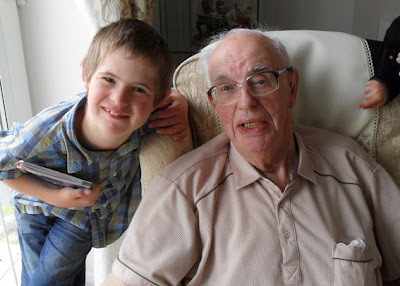 I've finally sorted some of our holiday photos, first my dad in the church grounds with Isaac and Noah, than with my mum and dad in their sun lounge with Noah very reticent to hand over the card to my dad. Paul's mum with both boys and Paul's dad with Noah in their lovely new purpose built old people's flat.

I thought I got the worse jet lag ever but Isaac is beating even me. Yesterday he woke up at 1.30am and therefore so did I. I spent the rest of the night up with him as Paul was already back at work so needed to try to get a little sleep.
Isaac finally crashed at 2.30 in the afternoon in his pushchair - I walked back from town with him (in an attempt to get my first lot of exercise since Sunday!) and was so exhausted when I got back that I crashed too at about 4.30pm I had some fairly groggy sleep until 9.40 and Isaac woke up at 10.30pm. He has been up all night again, this time with Paul and I taking it in turns with him. I watched 5 episodes of 'Brothers and Sisters' back to back, then Paul took over. As i still couldn't get to sleep I had a bath at 3.45am then the two boys (Noah was awake by now too!) got in.
I held Isaac in bed with me until we finally fell asleep for an hour but no more sleep since.
We got back on Wednesday morning after 41 hours of travel house to house and zero hours of sleep for me and about 8 for Isaac. Fairly stressful journey as the very first only an hour flight from Manchester to Heathrow was delayed meaning we missed our flight to San Francisco (we actually saw the plane leaving as we landed at Heathrow). Instead we were put onto NZ1 through LAX which meant all our luggage labels had to be written by hand in Manchester (and two pieces of luggage didn't arrive). We also had to sit in the very back row of the plane (the row usually left empty as the seats don't recline and you're right by the toilets) and of course the boys didn't get any children's meals. Once we got to Auckland, realised two cases were missing and reported it, we had very little time to make our connection to Palmerston. We got to the domestic and the boys and I got our boarding passes alright but Paul's ticket had been cancelled for some reason. Anyway we got home on time and have got one case back and just heard that they've found the other one in Heathrow and it will come overnight on NZ1 and should be with us in the morning.

Otherwise a really lovely trip - I will post photos and video when I finally hav ehad enough sleep! We feel quite proud that the boys and us coped so well.
Posted by Angela at 10:12 AM 1 comment:

haven't had much access to a computer these holidays so a quick update
we had a great time at Disneyland - highlights for Noah were being trained as a Jedi knight and fighting Darth Vader and two storm troopers, he also plucked up the courage to go on California screaming roller coaster and loop the loop - scary for \Paul as he had to go too!
Isaac liked best the tiny petting farm they have behind big thunder mountain but he was also quite impressed with small world. i liked going out to eat at the cheesecake factory - no one could finish their portions.
We are now in UK and have met up with lots of family. Mum had a good birthday and its great to see Paul's parents settled in their wonderful old people's accommodation.
Jet lag is still hitting pretty hard I've only slept through on one night and most nights get up for an hour or so and have a cup of coffee.
Lots of great shopping here and the exchange rate is in our favour so we should have another good few days.
Posted by Angela at 2:52 AM No comments: