After 15 years NO TEENAGERS

Today is Hannah's 20th birthday (and therefore Sam and Anika's 3rd wedding anniversary - lovely to have two dates the same) and it means we no longer have a teenager in the house. We spent some time working out our teenager situation and realised there were two years when we had FIVE teenagers and two years when we had FOUR TEENAGE DAUGHTERS. Since Joe turned 13 in 1995 we have had teenagers living with us, not surprising our sanity is in question after 15 years! We now will have two and a half years to wait until Noah is a teenager.
We went out as a family to celebrate Hannah's birthday and spent the day in Greytown which is a lovely little antiques and coffee shops type town in the Wine region of NZ. We went to Puzzlewood and spent over two hours there - much longer than we'd anticipated. It was great for Noah and even Isaac with a playroom of puzzles. Hannah played a game called traffic jam and enjoyed it so much I bought her the small version from their shop as a birthday present.
Posted by Angela at 8:37 PM No comments: Links to this post

We've taken the step that marks the end of the tube feeding era and beginning of healthy little boy era and have moved Isaac out of our bedroom.
We've just returned from 3 nights in motels so Isaac's routine is pretty disturbed anyway so I thought this would be a good time to move him. We do have a spare room (although Hannah's friend appeared to be sleeping in it when we got back from our time away!) so I considered making it Isaac's room but Noah was adament that he wanted Isaac to share his room.
We've moved his cot his change unit and as of half an hour ago his clothes. This was a good opportunity to see how much clothse he has - I tend to pick up bargains on trade me or at second hand shops without really thinking whether he needs them. So it seems Isaac has 26 pairs of trousers!! I am now sending to the op shop those that don't have enough elastic in the waist to stay up or those that Noah once wore and are no longer in fashion (Paul says boys don't have fashion but how many little boys in orange check dungaree shorts have you seen around recently?)
Paul has two weeks holiday now so the plan is to finish unpacking the house and make sure everything has a place to live. We will also try to reclaim our bedroom and ensuite to ourselves after more than four years of having Isaac in with us with all his alarms and crying!
First night away from us wasn't that great and I was up with him twice last night unfortunately and also with Noah who had decided to sleep in the lounge as Isaac had woken him up. But it can only get better!
Posted by Angela at 1:54 PM No comments: Links to this post

I've just binned all the left-over purple giving sets that used to be connected to Isaac's feed pump. The nutricia rep phoned to see if we needed the pump any more and it was so good to say Isaac is eating and doesn't need a pump any longer. She told me they no longer use the type of backpack that I used to have hanging on the pushchair all the time holding his feed, so that's in the bin too. I have also put all his syringes, tape etc into a bag but haven't quite had the confidence to bin that yet.
It is only just sinking in that we have a boy who no longer needs to be accompanied everywhere by medical stuff. Tomorrow Noah, Isaac and I are going with Paul to New Plymouth (a bit sad when your summer holiday is accompanying a doctor to his clinics!) and will have much less to pack and may even dare to leave behind Isaac's folder of medical letters.
We are gradually learnign to trust Isaac to eat the amount he needs, although I still don't like it when we've just started feeding him and he signs "finished".
Rather than doing a full very messy play picnic, I now offer him an assortment of finger foods on a big plate then to prevent the throwing take the plate away once he's selected one thing to put on his highchair tray. He is trying a selection of different biscuits now and yesterday even put a slice of banana in his mouth.
Isaac now almost always sleeps through the night and awakes happy in the morning - this would have seemed unbelievable to me a year ago. We are even thinking about moving him out of our bedroom at last.
When you feed him now he opens his mouth for the next spoonful - I can remember thinking how wonderful that would be to see him do that.
I need now to get the balance between being swept away by the miracle of him eating and treating him now as a child able to eat autonomously.
Posted by Angela at 1:36 PM 2 comments: Links to this post

January is SOOO quiet in New Zealand. At work Paul doesn't have the usual meetings and journal clubs. He often makes it home for lunch.
School doesn't start back for another two and a half weeks so we mostly laze around at home. I am trying to read all the latest Patricia Cornwell books in order - unfortunately for two of them its only been half way through that I realised I'd already read them!! We are also slowly watching our way through "Frasier". There are eleven series of this so it will take a while.
Beth has just left this morning to go back up to Auckland and Hannah is at a church youth camp called Soul Survivor so the house is a bit quieter than usual.
Noah loves having all this down time but still has to be watched or he finds mischief to make. Today he has taken down the washing line and scattered pegs all over the garden and locked the garage keys and part of the vacuum cleaner in the garage.
He has watched some of his Xmas present DVDs over and over. One of them is "Lilo and Stitch" so when we go to Disneyland in May (on our way to UK for mum's 80th birthday) we may stay at the Pacific Pier hotel which is lilo and stitch themed.
Isaac has managed to put on a small amount of weight, going from 11.6kg when he had his surgery to 11.9kg now. He is getting rather picky with his eating and has gone off calciyums which were the mainstay of his diet. he still won't drink, throws food on the floor if he has more than one thing on his highchair tray and refuses to spoonfeed himself.
I mentioned my concerns when the SLT visited and she is going to try to get us an appointment with the psychologist. I'll welcome that as he is certainly a very unusual little boy even if he doesn't really fit into an autistic disorder.
This last week we looked at a few wedding venues and have decided on the Coachman hotel as we all liked it and it will have rooms (in both the hotel and adjoining motel) at hand for guests (and to contain Noah and Isaac). We now hope we can persuade some guests to travel out from UK.
Posted by Angela at 3:51 PM 3 comments: Links to this post 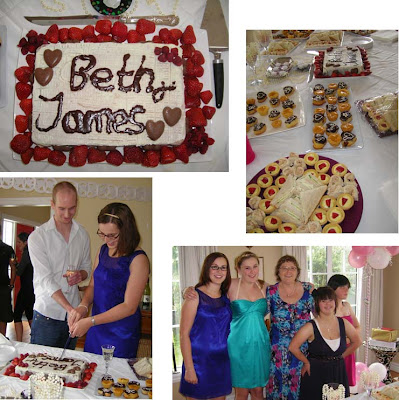 We had 47 people here yesterday for Beth and James' engagement party. Typical of us girls I think we all had new dresses for the occasion - it was amazing how they all colour coordinated - even our extra visitor who had been staying with us a few days because of a family crisis.

Hannah had fun making the balloon tree in the photo below. I said to the lady in the party hire shop "This is one of the few occasions I can be pleased to have a medically fragile child, because it means we have a drip stand in the house which will be just perfect for the balloon tree."
I don't think the shop assistant quite knew what to make of that!
It worked so well that Hannah has requested we don't return the drip stand to the hospital (Isaac doesn't need it for his night time pump feeds now as of course he is no longer tube fed) until after her birthday party in mid February so that she can have a balloon tree too! 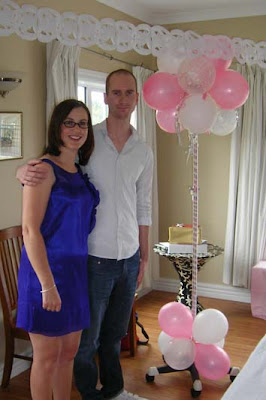 For Christmas I gave Noah this fantastic value suit which I bought from trade me - NZ's version of ebay - it is Ralph Lauren wool, had never been worn and had cost 250 pounds new - I got it for $100.
It was good that Beth and James got engaged to give him an occasion to wear it.
He is modelling it here with the tie that Paul bought when Noah was a very sick baby in Wellington hospital having a 'pull-through' operation for Hirschsprung's disease. I can still remember the nurse telling us we needed some time out from the ward and shooing us away. We went to a little shop in central Wellington and found a tie with Noah's ark on it. 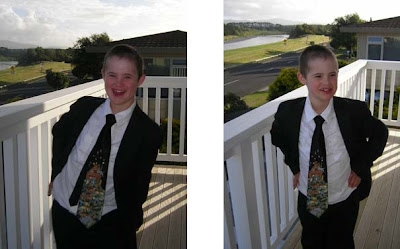 Another special item at the party was the table cloth we used to put the cake on. Paul and I used it at our wedding and my mum and dad at theirs.
Posted by Angela at 8:05 PM 3 comments: Links to this post 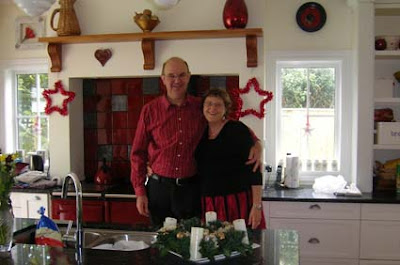 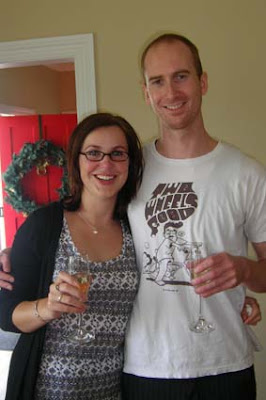 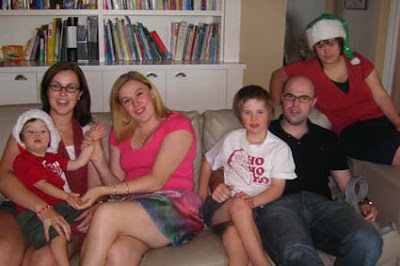 New Zealand tends to shut down for January. Can I use that as an excuse for why I've only just got round to processing these photos?
James had just proposed to Beth, you can see she is still in tears!
I love the photo of our Christmas kitchen - the colour of the aga is so Christmassy.
Posted by Angela at 7:59 PM No comments: Links to this post