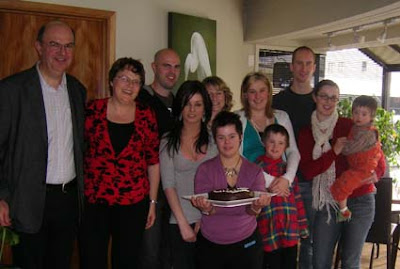 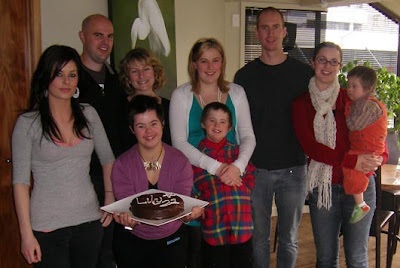 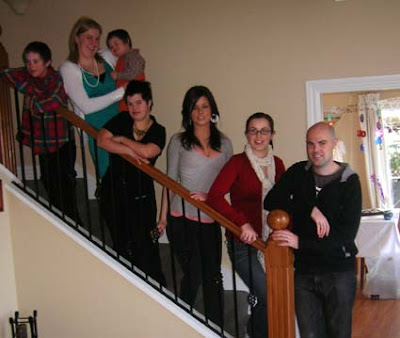 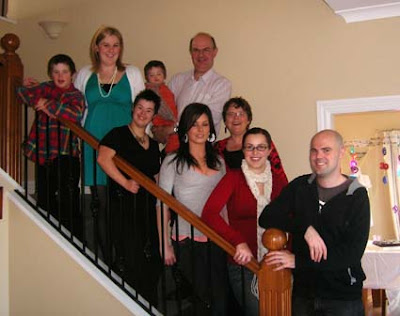 I promise to update the blog properly some time. Meanwhile some family photos from the joint party for our 30th wedding anniversary and Lily's 21st birthday.
I finally got my wish to photograph us on the stairs like in the Brady bunch!
All the kids except Joe (in Korea) were here, they've all signed a photo frame for Lily and we'll make a print of the one with her cake to go in the centre of the frame.
Posted by Angela at 6:52 PM 2 comments:

Just a quick update and apologies for not posting for so long
It was our 30th wedding anniversary last Tues and Hannah kindly looked after the kids so Paul and I could have a two day break in Martinborough (wine country) which was fantastic. We are having all the family here this w/e and having a party on Saturday. The invite is copied below - lots of people think it's Hannah but no that is me aged 22! 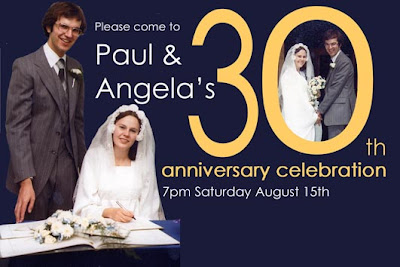 Paul is working like mad to make a DVD of the events of the past 30 years and I am supposed to be scanning in some stills of the many houses we have lived in (we've shifted 18 times I worked out) rather than blogging.
Thanks for the tips about Disneyland that people posted, they're going to be very helpful.
Lily has got her hearing aides and I have changed from cynical about whether or not she needed them to amazed at the difference. She keeps saying "Now I can hear ..... examples are the alarm on Isaac's feed pump, being called to unload the dishwasher, though the toilet door.
The hearing aides are red and black -very trendy- I will post a photo when I get a minute.
Posted by Angela at 4:30 PM 2 comments:

I planned to call this post 'not Noah' as things have happened this week that were not his fault. Unfortunately though today's events meant I had to change it to 'not always Noah'.
Today started (6.30 am) with Noah coming into our bedroom wearing his swimming trunks, when asked why he was dressed like this he said "So I can splash in the water on the kitchen floor"
Yesterday evening we had a goodbye party here for Paul's registrar who is returning to Scotland, so quite a few glasses and bottle of wine were still around in the kitchen which we didn't want Noah to touch. Paul disappeared downstairs with a few bath towels and soon Noah didn't need his togs as the floor was dry again.
We expected lunch time to be nice and easy as we could just warm up left over from the party, but the saucepan didn't see to be warming very fast and we realised the aga was almost cold. Noah said he had only pushed one small button with a circle on it for only a very little while.
Paul looked at the aga instructions and read "to completely extinguish the pilot burner press the button with the circle on"
We have finally lit the pilot light again (this involved going to the DIY shop to buy a special lighter) but will need at least 24 hours for the aga to be back to full heat.

Anyway the post is supposed to show it is not always Noah. Our solar heating system had stopped working and was reading temperatures of 130 degrees centigrade on the roof (in mid winter!) and only 14 degrees in the tank. I called the engineer as I was worried the pipes on the roof might explode or something.
When he came he found there was air in the system. I said to him in amazement "But how could a 10 year old with Down syndrome get air into the system?"
He looked at me as though I was a bit odd and explained it had nothing at all to do with Noah but with the way the system was installed!
The other incident this week was very scary but involved my friends son ( I'll call them Jackie and Robert) who is the same age as Noah and has severe autism as well as Down syndrome. It showed me how some children can be far far more difficult to manage than Noah.
Jackie comes for afternoon tea each Monday after school and it's one of the few times she get to go out with Robert and his sister who is also on the autistic spectrum.
Robert likes to climb into Isaac's cot and get hold of Isaac's toy frog and bite it (he has very few toys he likes and this is the same as one he has at home) and then climb between the sheets of our bed. If we try to stop him he plays instead with the sliding doors in the (supposedly) adults only lounge.
This Monday we decided to keep him downstairs. Robert is totally non-verbal, doesn't understand instructions and is quite big now for Jackie to lift. He nearly knocked Jackie downstairs at one point but we managed to get him down and then let him sit in the garden underneath the washing as he likes to watch it flapping.
I consider the garden to be well child-proofed as it has high fences around it and a swimming pool like gate at the only entrance.
We sat in the kitchen and could hear Robert. After a while I said "Where's Robert?" thinking he was back upstairs in our bedroom. Jackie looked around and couldn't find him and really started to panic.
I have to say at the time I thought she was over-reacting but in hindsight she was right!
She ran outside and I searched the house and looked along the river banks from our balcony but couldn't see him.
I decided to phone the police thinking that if anyone had found him they'd phone the police. By the time I got through I saw Jackie holding Robert outside.
He had climbed down the stones of the river bank (so was too low for me to see him from our balcony) and had been about to get into the river. Jackie had screamed at some passers by to grab him as he has absolutely no sense of danger and would have been swept away in the fast moving water. She says he is attracted by moving things so would just have wanted to get to it.

We worked out that he had probably dropped his toy frog over the gate in the garden then being unable to tell anyone about it had climbed over the gate to get it (Noah then helpfully demonstrated how it is possible for ten year old to scale a 1.2 metre high gate). Then Robert would just have wandered around until something attracted him.
Jackie has now decided that Robert will have to spend his visits to us strapped into his wheelchair and I've started investigating GPS devises that children can use. Apparently the Alzheimer's association have some which they will loan out.

It has also made me think about how terrible it would be to lose Noah at Disneyland in four weeks time. I think we seriously may rent a wheelchair there so that Noah can be strapped in it especially when we're waiting in queues. I've read on some forums that this is allowed for children with autism and other disabilities and sometimes you can enter rides by less crowded entrances. They say though that other people may frown on using a wheelchair for someone who can walk as they think you are trying to queue-jump and get special attention.
Posted by Angela at 2:25 PM 3 comments: