It is becoming a family tradition to celebrate the American festival of Thanksgiving by giving thanks for the birth families of our adopted children. This year we invited two other families along, so there were a total of eight children here not living with their birth parents (and Lily said we must remember Rachel's birth parents too even though Rachel wasn't here so that made nine). Noah was the only child not able to light a candle to remember his birth parents - (he was a bit disappointed to be told I was both his birth and forever parent!) so we let him light the first candle on the advent crown instead.

We made sweet potato with marshmallows on and pumpkin pie and were very pleased when the American family visiting thought it tasted like the genuine article. We also dressed the boys in their American T-shirts and put up our Christmas decorations as they do on Thanksgiving w/e in America. 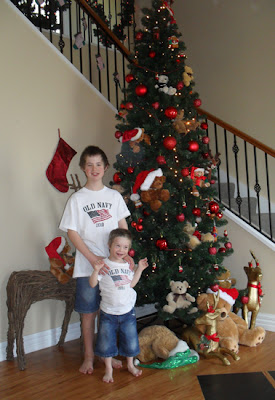 Noah read a children's book on Thanksgiving then Lily read a simple book about adoption and fostering 'we belong together'.

As each child (or their parent in the case of young ones) lit their candle they could say what they wanted about their birth family and show photos - it was very moving when a teenager who has grown up in care said that finding her family at age 15 was the best thing that ever happened to her.
Posted by Angela at 4:43 PM