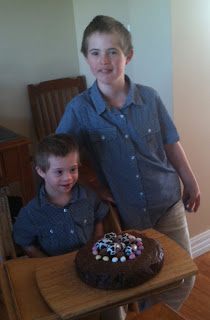 Although I hardly dare say it life has been fairly peaceful and uneventful (and long may it continue). The Massey uni break coincides with the boys Easter break from school and Paul has been off all four days of the Easter holiday, we went to see the Dr Seuss art exhibition on Saturday and today we went for a long walk - Isaac walked a lot of it and is now absolutely exhausted.

Easter itself seemed very quiet as we had no extra family members here - Sam and Anika have now moved to Sydney where they will be flatting with Beth and James. They have just found a lovely house to share. Hannah and I are going to visit at the beginning of June and are already quite excited.
Isaac is suddenly making progress with his speech which is amazing after so many years of plateauing - he tries to copy everything we say (especially whatever Noah does or says). In the esplanade today he repeated the same word four times until I eventually understood he could hear the little train and was saying 'train'.
Noah is trying to write a bit which is also good as he used to hate even holding a pencil. He came to ask Paul how to spell a word as he was writing down the names of some of Lily's songs. I heard Paul first spell 'birthday' then when Noah said that was wrong 'version' finally Noah told us it was a song by Madonna - I think I'd prefer him to sing"like a birthday' than"Like a virgin"!
Posted by Angela at 3:12 PM

So glad things have quietened down for you all. The boys are looking so much older than when I last saw them. A really nice photo!