We've had a good break from school and Massey so far. Beth went back to Australia on Tuesday and on Wednesday Paul had a clinic in New Plymouth so the boys and I went with him.

I was SO SO tired after the wedding and was able to have a snooze each afternoon while the boys watched a DVD at the motel.

We stayed till Good Friday and It's been the long holiday weekend since then, so we're already half way through the holidays without having to think of anything to do.

Next week we're going to the Wiggles om Wednesday. It will be the first time Isaac's been to the theatre so it will be interesting to see how he does.
Isaac is getting a lot of enjoyment out of simple things now. The photos show him sitting in a box, which he loved being pulled along in, and in the bath while on holiday where we could only just see his face peeping out above the bubbles. 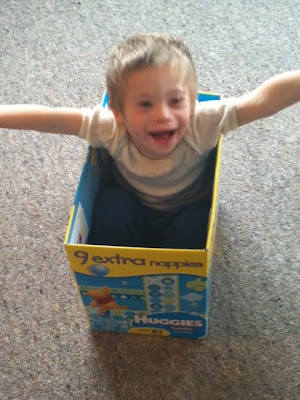 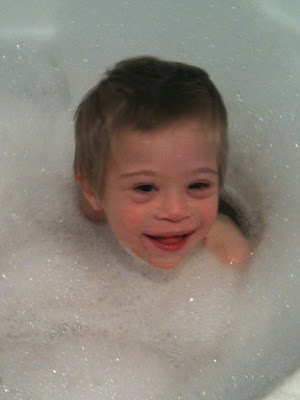 Noah spends a lot of time "sorting out wires' - one of his autistic like behaviours. We have two boxes in the garage we just let him have, but he can make an incredible mess with them as he is proudly displaying in his photo! 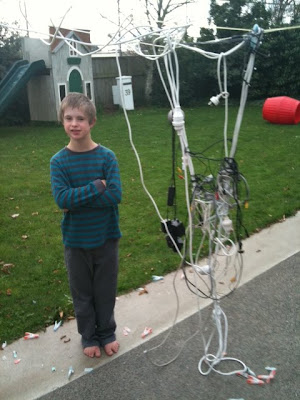 Love the photos! Ben, my seven year old would LOVE to have a boxful himself :)

I am sure Isaac will love the Wiggles. Emily, Luke and I went last weekend, and it was great. I am now a convert! A wee tip if you haven't been before- you can make cardboard bones for Wags the dog, or roses for Dorothy, and the Wiggles come into the audience to collect them. Luke got to meet Murray, which he loved.

Glad you are enjoying the holidays (hope you still are despite the rain and wind) and had a wonderful wedding. Photos are gorgeous.
I wish I'd known you were going to the Wiggles. Sometimes if you write to them they do "meet and greets" with children with special needs. We were lucky enough to meet (briefly) and get a photo with them this week. Hope Isaac enjoyed the concert.

What awesome photos of Isaac. He really is the most beautiful little kid.
And how cool about the wires for Noah. Can't believe how tall he is getting .
Love to you all,
Bridget
p.s. hope you all have a wonderful time at the Wiggles!