Isaac is still so proud of himself being able to walk. He totters around and collects things which he presents to me - the toilet brush is a favourite! Finally he can play with the birthday present we gave him for his second birthday 15 months ago, it's a little toy pushchair and he sometimes loads it up with his soft toys.
He can also climb onto chairs now (but sometimes can't climb off again) While we were on holiday he looked like such a little old man sitting on a garden chair that we couldn't resist giving him the newspaper and taking this photo. 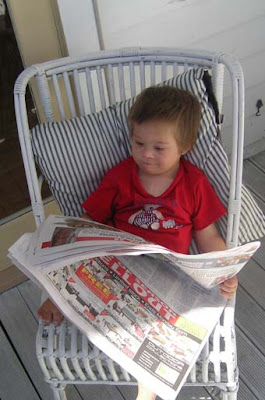 He is also picking up more signs and on the way home from school signed two together - goodbye cat. He tries to copy animal sounds and says "Noah" in a sing-song voice.
We found him by the playstation the other day. The microphones were still out where Lily had been playing Singstar. Isaac had a microphone to his mouth and was trying to sing!
Posted by Angela at 9:49 AM

That is such a cute photo of Isaac. He sounds like such a sweetie. Although I'm very glad that Pete doesn't bring us our toilet brush as our one is very hideous.
Hope you guys have a great week.
Bridget

It is great he is doing so well. The freedom of walking must be fantastic for him. From what you describe, such changes in him over such a short time! Brilliant!