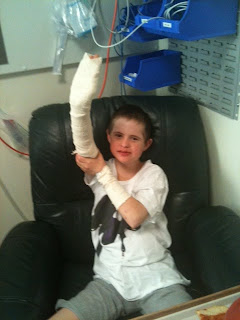 Noah is much more active. He found the controls for his bed and has managed to put it into all sorts of different positions. At one stage he had the bed as high as it would go and on another he was lying on about a 45 degree angle almost sliding out of bed. He has also been praticing bandaging and managed to bandage his own ankles, legs and arms.

It is hard to believe he had major surgery only a week ago. Today he did say his tummy was hurting a bit, but he had just gone down a slide and dropped about 6 inches off the bottom and on another occasion climbed through a tunnel on the climbing frame.
Hopefully he will be home very soon.
Posted by Angela at 9:51 PM