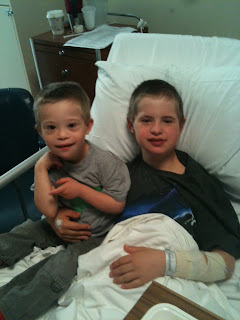 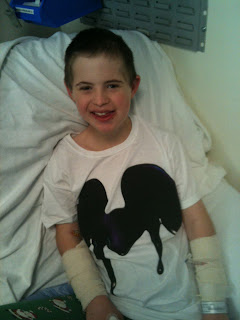 Santa said that as Noah was so sick he could have an early Christmas present of epic mickey T'shirts. Here is Noah wearing clothes for the first time since Monday -proudly modeling the t-shirts.

I (Angela) am home for Saturday night. I walk in the front door of home and am overcome with weariness even though I feel OK while at the hospital. My eczema is flaring up though which I guess shows I'm more stressed than I realise. I have been catching up on emails and its wonderful to read all the messages of support and realise how many people are praying for us.

Noah seems more of his old self today - he told his nurse she was "pathetic" and when I said that was very rude and could he please say something nice he said she was "unpathetic"!

He calls his ileostomy his air bag but he still doesn't really want to acknowledge it or look at it. He had decided that he could not be a 'cool' boy if he had a bag on his skin and told Paul that "cool Noah was dead and sick Noah was here" As he feels a little better he is beginning to believe he may one day be cool again.
He also told us he was scared as he thought he would be living in hospital for evermore!
He is reliving a little of his experience now - there is the story of a child having surgery on the wall of children's ward and he has slowly walked along to read it with Paul or I pushing his 'robot' as he calls his drip stand! We have to tell his story and compare it to the child on the wall, there are some differences - for instance Noah went to theatre fully dressed whereas the non-emergency child is wearing a hospital gown! We have to talk about his getting tummy pains (which he unfortunately blames on Paul's BBQ) coming to hospital, having an x-ray, then getting a drip and going to theatre.

His dressing was changed yesterday and again he didn't want to look at the wound although we took a photo as we know he will be interested one day - he has more than twenty staples in an incision basically vertically from his sternum to pubis, the original scar from his baby surgery looks very small in comparison.

There has been progress today in that all of his pumped IV medications have stopped (this makes much less work for the nurses) so he no longer has his IV paracetamol, gentamicin, amoxicillin or flagyl - I am hoping that not being on these strong antibiotics may help decrease the copious watery secretions from his ileostomy. He has started loperamide (immodium) to also try to help this and has learned to take the tablets so we are very pleased with him.
They have also stopped his maintenance IV fluids with the plan being that he will drink enough to cover this, so he is only on replacement fluids for whats lost through the ileostomy.

His catheter is out and he is walking (rather bent) to the toilet now and was disappointed this morning that there is no longer a few drops of blood in his urine as there had been the first few times after his catheter was out.
He is allowed to eat what he likes and is picking at a rather odd assortment of food - it is a novelty being able to choose from a menu - so he had rice, chicken nuggets and salad for lunch - ignored the rice and salad and Isaac ate most of the chicken nuggets while Noah nibbled one. Paul brought in McDonalds pancakes for breakfast and at the rate of one bite per half hour Noah finished one just in time for lunch!
Still he is so much better, bouncing back really, and the exhaustion and poor appetite are to be expected. He will need to be in hospital till he is not pouring so much fluid out into the ileostomy.

Tonight is boy's night with Paul and tomorrow they are hoping that Noah can go in a wheelchair to Paul's office for the treat of looking at blood films under a microscope! He was allowed to be disconnected from his drips for a few minutes today when we pushed him the route he took to theatre so we're hoping he can manage a longer time without being exhausted tomorrow.

We keep reminding each other of our Christmas songs - Noah's is "I'll be home for Christmas" and ours is "All I want for Christmas is you"!
Posted by Angela at 4:55 PM

Many thanks Angela for these wonderful updates. Great that Noah is recovering well and gradually having his various medications reduced. Thinking of you all! love Karen