So here we are with more details and photos of our great weekend.

Hannah arrived here at 6am on Friday to look after the boys and get Noah and J off to school. She managed really well although we got occasional slightly worrying texts such as "Are there any stronger painkillers than panadol in the house?" and "Are the fumes from burning plastic dangerous?

We got to Auckland at 8am and met Rachel for breakfast in Auckland airport. We hadn't seen her for over 18 months. She looked really well although I couldn't quite understand what she meant when she told me she'd put on loads of weight! 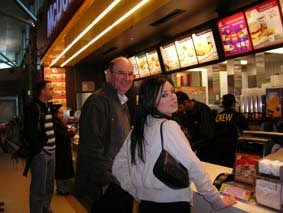 Meeting Rachel for breakfast at McDonalds and giving her her 21st birthday presents - and engraved silver bangle, a photo of Noah and Isaac and some money

When we got to our motel Quest on Mount I wondered who the very smart receptionist was, then realised it was Beth in her black suit and high heels. We walked down to her car with her to pick up her wig and gown, then up to the High Court where there were loads of people in wigs and gowns. 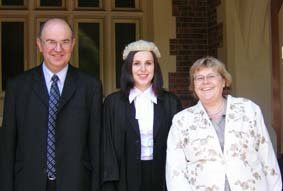 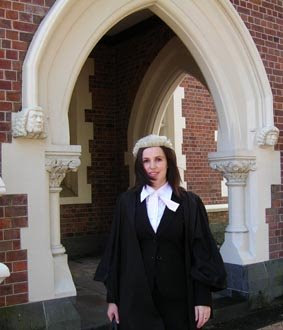 this shows more of the lovely court building

The ceremony was conducted in one of the beautiful old courts - NZ doesn't have many historical buildings and the High Court is one of the best I think. All the relatives and friends were packed in, then the sponsoring lawyers sat either side (in what I guess were the jury spaces). We were told to be silent and not take photos then the registrar said "All rise" and the judge came in wearing red robes and a long wig and all the lawyers bowed to him.

It was a very formal ceremony and in some ways resembled a wedding or church service. Each candidate (there were about 25) had to line up in turn at the side door then be announced and enter the court room and stand in front of the judge. Her sponsor had to say "May it please the court, I present Bethany Harper to be a solicitor and barrister of this honourable court" the judge then acknowledged the lawyer by name.

The judge asked all the candidates in turn if they'd uphold the law (more formal words to this effect) and each one said "I do" then they were asked if they moved being admitted and they all bowed.

Once they were admitted the judge gave an address about the law being equal for all, about this being a family celebration (there was a mum presenting her daughter, a father presenting his son, and a sister presenting her brother) and about keeping a life/work balance. Then the judge asked each candidate to speak - this was a bit like Oscar acceptance speeches but preceded by the words "May it please the court" afterwards the judge acknowledged each person and nodded his head saying "Miss Harper" At the end the judge retired but said I'll be back in a minute for a photo opportunity! 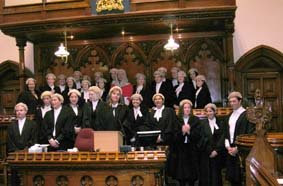 The final stage was signing a register. 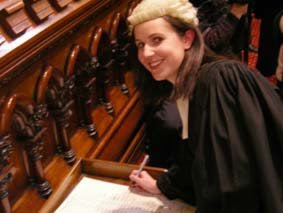 There was time then for photos with friends and family - it was lovely to see our friends Heather and Richard and their little girl Kristy (who Beth boards with), Beth's boyfriend James, and her friends from uni and church. 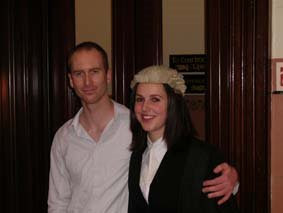 We grabbed some lunch, then Paul and I were delighted to be invited to an afternoon tea at Corban and Revell, the law practice where Beth works. 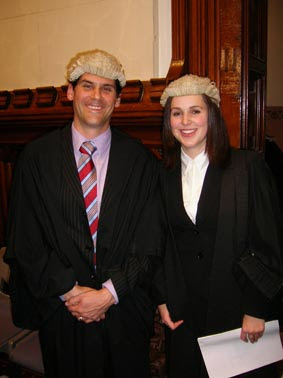 Beth and her sponsor - one of the associates from Corban Revell who helped her get her job there.