On Friday after visiting the law firm where Beth works we had a second afternoon tea at Heather and Richard's. It was great seeing their little girl Kristy running around. She is only a few weeks younger than Isaac and like him has DS. She is also adopted and came to Heather and Richard a week after Isaac came to us. It was also nice for me to find a child who weighs less then Isaac - Kristy is only 10kg (mind you her birth mum does only weigh 42kg!)

While we were there, Jenny turned up with her four children - Jenny has recently become friends with Heather and was Isaac's foster mum for the five weeks between his coming out of hospital and coming to us. It's so nice to be able to keep in touch and see her children growing - I think they were a little disappointed that we didn't have Isaac with us though.

We went from there to a brief rest at our hotel then on to a great Thai restaurant to be part of the party of 20 celebrating Beth's admission to the bar.

Next morning, Saturday, we got up fairly late (it's only possible to do this when we don't have the boys - THANKS HANNAH!) and had breakfast in Smith and Caughey - Auckland's posh department store. I used their toilets, the best in Auckland and looked at children's clothes I couldn't afford. We spent over an hour in Border's bookshop and then I visited Lush, the lovely cosmetics shop while Paul took our shopping back to the hotel.

By then it was time for another special event and we met Rachel and Adam and Beth and James
for lunch at White the lovely restaurant of the Hilton hotel. I had never been here but Paul chose it as his favourite of fairly posh Auckland restaurants (he visited a lot with drug reps) as it has reasonable sized portions and you can still identify the food you're eating!

It is set near the viaduct sticking out right into the harbour. It was wonderful weather with the sun sparkling on the water so we got some great photos that look as if we're all on a cruise ship! 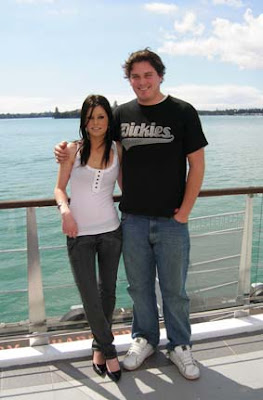 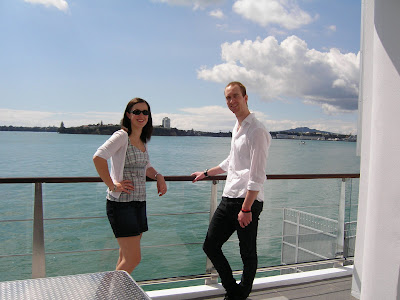 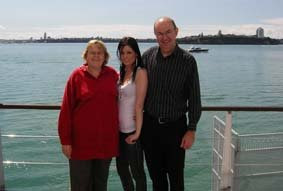 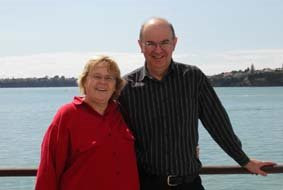 We were exhausted and had a quiet afternoon and evening back at our hotel. Then next day it was back to Auckland airport first thing and back home to Palmy with a lovely view of the mountains on the way.