We got an email from the paediatric surgeon at Starship (the children's hospital in Auckland) saying that yes Isaac does need surgery for his hiatus hernia and has been added to the waiting list. He hopes he can do the surgery laparascopically like last time and he will use some mesh to reinforce the diaphragm. 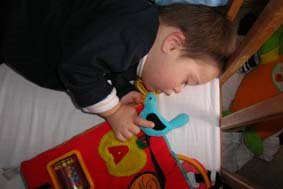 I watched Isaac sleeping peacefully holding onto the little bird on his toy and thought of how it's a long while since Isaac had a hospital stay and how he'll be so much more aware of everything this time.
I wish experience made it easier but instead with both Beth and Isaac waiting for surgery and Lily on high dose steroids I'm reminded of those early days when Noah was so sick and then battled infantile spams and we learned about the roller coaster world of sick kids. Also of course we know the practicalities - that the ward is so cramped with no single rooms and that parents have to leave their mattresses on the floor at the end of the corridor during the day and pick them up each night.
However we have learnt so much, that I think we'll cope much better now - hopefully Paul will be able to take a week's compassionate leave and share the mattress sleeping duties with me! We may even get a room in Ronald McDonald house and be able to bring Noah up with us too, and we're lucky that we have so many big kids in Palmy who can keep an eye on Lily and Hannah. 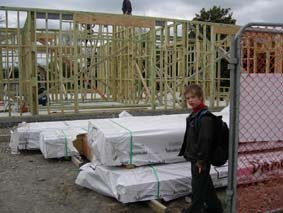 On a nicer note, our new house is growing. It looks enormous even as a concrete slab and I remember the concrete slab for our house in Bury St Edmunds looked so small I thought it was the garage! We can see what size the windows will be now they have started putting up the framing and to think I was worried that it wouldn't be light enough!
Noah was excited to walk round to look at 'our being built house' after school but afterwards was so exhausted he couldn't be bothered even to take off his coat and bag before having a rest! 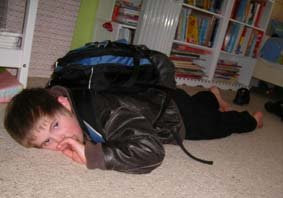 Looking forward to seeing you in the next few weeks, maybe a meal or a cuppa in order!