I'm so so pleased to be home. Each time I'm away reminds me how much I love being a mum to my kids and how I like the gentler pace of a New Zealand town to a busy city.
Having said that San Francisco is a lovely city to visit - a kind of combination of Sydney and Paris. I loved the architecture and shops, but the real highlight for me was joining hands with everyone at Glide Methodist church and singing "We shall overcome today"
Here's a few photos of our visit 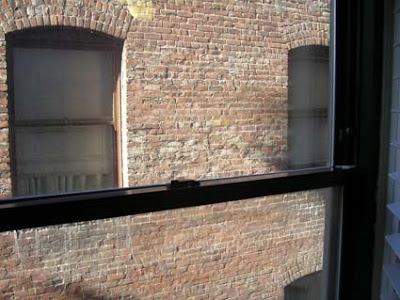 One of the worst views of San Francisco and unfortunately the view from our hotel room! Paul declared it the worst hotel he'd ever stayed in in America but as there were 23,000 delegates at his conference, there was very little hotel space. The Mark Twain hotel is on the edge of Tenderloin, a rough district so there were lots of street people begging as we approached the hotel and lots of noise of drunks at night. The room was very dark (this picture looks better than it was as it was during the short period that sun shone on the wall) and needed lights on all the time. It also had a very small bathroom with no big towels, didn't provide breakfast and didn't have tea and coffee making facilities. We paid (or at least Paul's CME budget did) nearly $300 NZ a night for this! 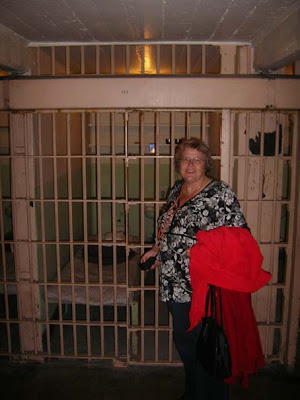 Our hotel was a lot nicer than the accommodation here at Alcatraz though! Here I am standing by one of the 5 feet by 9 feet cells that inmates spent up to 23 hours a day in.

We would highly recommend the trip to Alcatraz. It's part of a national park and I assume that's why it's not more commercialised. No cafes and only one gift shop, a great commentary to listen to as you walk around and wonderful views 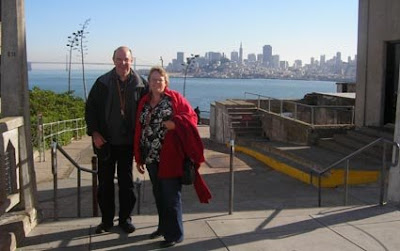 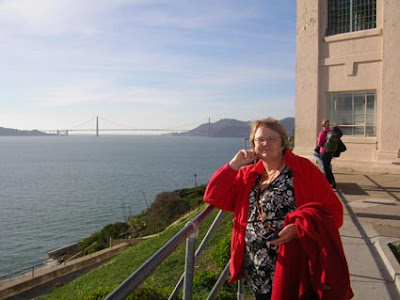 Looking the other way to Golden Gate bridge 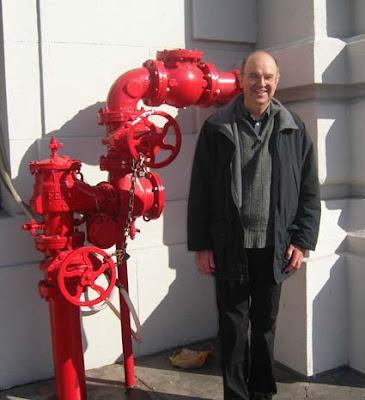 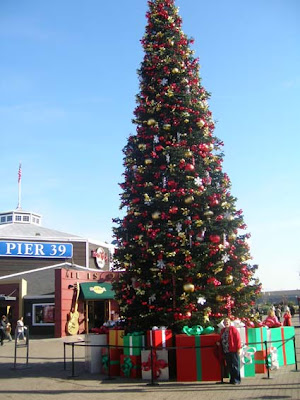 If you look carefully you can see me standing by the red present at the bottom of this enormous Christmas tree. We had our lunch at Hard Rock cafe which you can just see behind. NZ doesn't have a Hard Rock cafe and I still have such fond memories of taking Sam to the one in London when he was about 10, so we tend to end up in one whenever we see one (although I gave the one in Singapore airport a miss earlier this year) 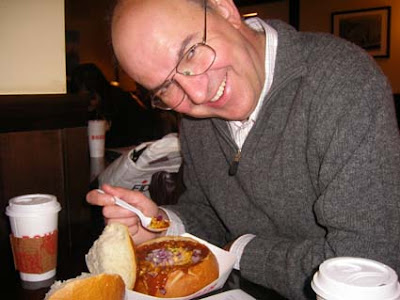 Another good place to eat we found was Boudins - they make the sour dough bread that San Francisco is famous for. Here Paul is having some chilli served in a bowl made from the bread - you finish your soup then eat the bowl!

We travelled for nearly 24 hours to get back. We left our hotel in SF at mid day - 9am NZ, flew an hour and a half to LA allowing plenty of time for our NZ flight at 7.30. The plane was really full with Christmas so near but we arrived a little early in Auckland (12 and a half rather than 13 hours!) at about quarter past five. We were then very lucky and manged to transfer to an earlier flight back to Palmerston. In fact we were back home by 8.20am in time to take Noah to school and immediately get cross with Lily who was walking around in her pyjamas when she should have been on a bus to work at 8.15!

Hannah and Joe were both delighted to have us back and said they may not volunteer for the job of caring for Isaac, Noah and Lily again!!

My name is Sarah said...

Looks like a good trip. I have never been to San Francisco.

I was in San Francisco a 2 1/2 years ago for work, and enjoyed a long 3 day, free-time, weekend visiting it. It's quite an interesting city. Unlike you, I DID have cheesecake in the Cheesecake Factory: when I looked around and saw the size of the servings on the other tables, I decided to skip the savoury part of the menu, and go straigth for dessert... Yummy!

And I was brave enough to drive myself around (the company was paying for the hired car for two weeks! Might as well make the most of it)and cross the Golden Gate Bridge to look at the view from the other side.

Glad you got home safely. I bet your little tribe were happy to see you :-)