Noah's current character obsession is with Wall-e a loveable little robot from a new film.
For a boy with Down syndrome Noah is very good at looking up things about Wall-e on our computer and using all our fast Internet time on watching very poor quality you-tube videos.
To get him away from the computer I said why didn't he make Wall-e out of duplo with daddy. Paul ended up getting quite carried away with this and you can see the result! 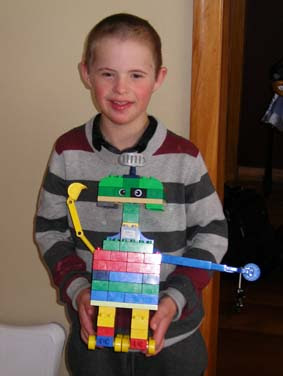 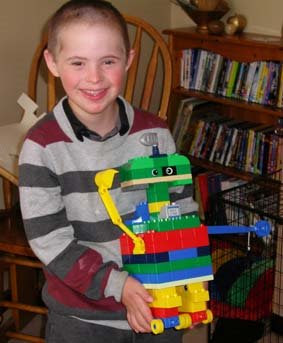 Isaac had a happy weekend as he learnt to kiss - a very wet, noisy business but oh so cute - I'm still a bit worried he might bite me though 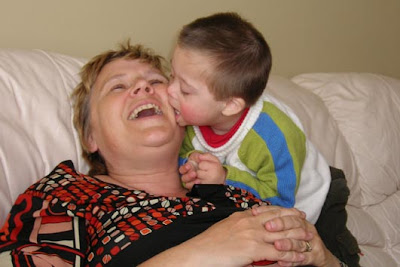 He is also incredibly cute when he falls asleep sitting up hugging his white teddy! 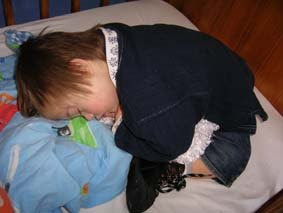 J has unfortunately not had such a good weekend as because of an incident at her home she ended up at the police station during her access visit to mum. The police phoned us but our phone was off the hook and we didn't get the message. But a kind policeman described by J as "an England man, plumpish with 3 children" looked after J while her mum was interviewed. Today I phoned the police station and asked if they recognised the description (which they did) and asked them to pass on our thanks - I wonder how much the poor officer will get teased?
Rachel very rarely phones us but chose to do so today in the middle of our church service! I phoned her back later and she is doing really well. J is longing to meet her as I sometimes tell stories of the sad things that happened to Rachel and how she behaved when she first came to us. I told J that Rachel always says "Is that girl still with you?" and J is so pleased to be remembered. Hopefully we'll be able to spend some time in Auckland during Paul's end of January holiday and maybe they can meet up then.
We were on TV again this morning - an edited edition of the earlier programme. it was good seeing how the kids have grown over the past year since it was filmed.
Posted by Angela at 4:59 PM

Well I guess that will be a 'dinner date' for the end of January then!

Hi Angela,
Wow, that duplo Wall-E is awesome. He could win a competition. And Isaac's kisses look much like Petes. A very moist, but lovely experience.
Thanks a lot for your comment on Pete's CB. And that link was very interesting. Especially the bit about no matter how much you sleep, you are still exhausted. That's it, I'm on light duties for the rest of the year.
Hope you guys have a great week.
Ta ra,
Bridget